5 Wedding Traditions and Their History 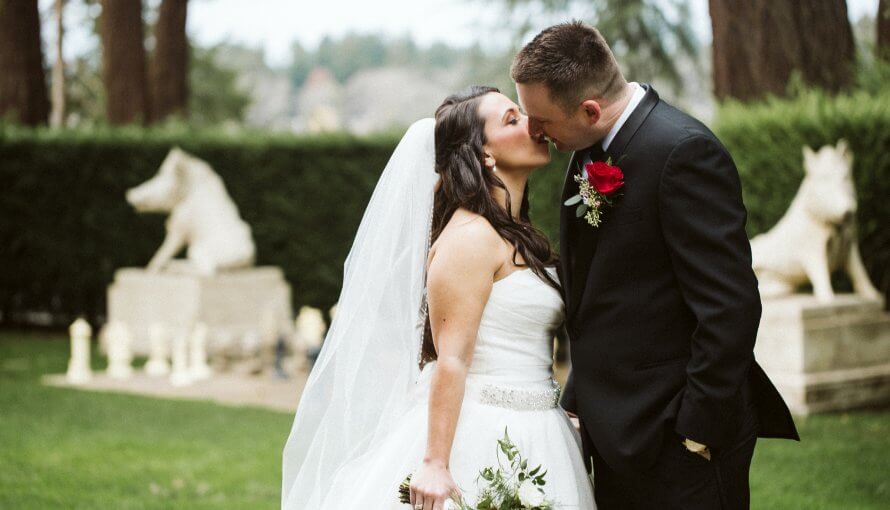 Weddings have been happening for centuries, which means that a heck of a lot of traditions have come and gone and come back again. Where did some of our current traditions begin? Keep reading to find out!

Seeing the Bride at the Ceremony

Every bride looks forward to seeing her groom at the end of the aisle.  So many pictures on Pinterest show an emotional groom weeping or having their jaw drop as their bride walks towards them.  But what is the point of waiting to see each other until that moment? Way back when marriages were business deals, father’s gave their daughters to rich, land-owning families.  BUT obviously that wouldn’t work so well if the groom saw the daughter before the wedding, thought she was ugly, and decided to call it off. Nice, huh? These days that obviously isn’t the case, though many still choose to wait anyway.  (Want to know why a first look can be a better option?  Check out this article!)

Brides wear a veil for much of the same reason that we wait until the wedding ceremony to see each other.  It kept the bride hidden until the last possible minute. At that point, it really, really was too late for the groom to back out of the transaction.

There is another reason for a veil as well!  Back in Ancient Greece and Rome, bridal veils were worn to confuse the devil and be protected from the “evil eye.”  In other cultures, they were also worn to protect the woman’s modesty or to hide them from evil spirits.

While white dresses are traditionally worn gowns by the western world by far, it was relatively recently that even that became the case.  Before 1840, most brides wore their best dress, usually in red. But in 1840, Queen Victoria got married to Prince Albert. She decided to break out of the norm and wore a white lacy dress.  At the time, it had nothing to do with purity, and instead had everything to do with wealth. After all, only the wealthy could afford to have a truly white dress. That being said, it was the queen!  The trend of the white dress caught on and a new normal was born. That doesn’t mean you have to follow that trend! These days brides wear dresses of all colors, including pale pink and black.

This one comes from a couple of different places.  The first of the most often discussed is from Celtic and Pagan traditions of handfasting, where the bride and groom tied their hands together…. over an entire year before getting married.  It symbolized the couple’s betrothal or engagement. If you couldn’t handle it for a year, then they would call it off!

Another look at history also shows a Roman tradition where the bride’s belt would be tied in knots before the ceremony.  The bride’s belt was called the Nodus Herculaneus which symbolized the virility of Hercules, who fathered seventy children.  The groom had to untie the knots prior to consummating the marriage.

These days it is a lot more romanticized than that and often literally done (rather than just telling people that they are “tying the knot”). Many couples use it to signify their commitment to each other. They often bring in family members and friends to tie the knots for them, to represent the joining of the families as one.

Speaking of consummating the marriage, things were a little more… contractual back in history.  Generally, right after the wedding was done, the bride and groom would go and, well, consummate the marriage.  It was considered good luck to get a piece of the bride’s gown, so hordes of guests would gather around and try to rip the dress off.  In order to distract people from coming after them, the bride would toss her bouquet and then the couple would flee to their chambers. When they had finished, the groom would throw the garter out the door to prove that the deed had been done and things were now official.